I was having a fun day creating so I pulled out my GinaK and Technique Tuesday stamps. Since we are hopefully getting some spring weather soon, I thought this image would be a great way to celebrate. I first die cut my card with Spellbinders Nestabilities, laying part of the folded paper away from the cutting edge. This allowed me to create a card. To regain the full die as the card front, I cut it again from a single piece of paper and mounted it on top.

After stamping the image on Papertemptress cardstock, I colored it with Copic markers. The image was die cut and embossed with Spellbinders Nestabilities and then inked with Colorbox Ice Blue ink. I then added this to some Blue Ruche cardstock (Papertemptress) that was also die cut and embossed. Once the card was assembled, I stamped the sentiment, allowing it to run off the card. 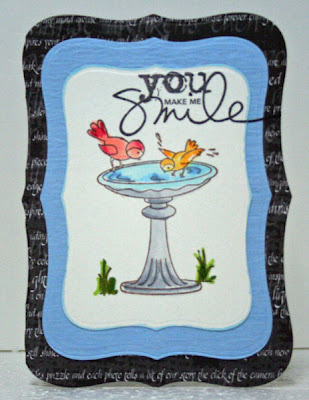 Clearsnap Smooch was added to the grass patches and the darker patches of blue water for a glistening effect (love this stuff).