Here's a fun mini album I created this month for Scrapbookpal.

The album itself measures approximately 4" x 5".  I used an older Sizzix book die I've had forever, but you could easily recreate this mini album by cutting chipboard to the size you desire.  Since I wanted some substance to this album, I adhered 2 pieces of chipboard together for each cover, used chipboard for each page and then covered each page with cardstock. 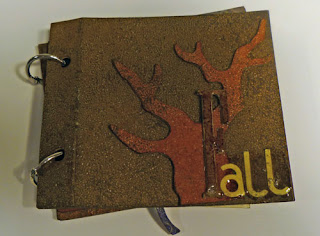 For the cover, I inked the chipboard with  Spiced Marmalade, then added embossing powder.  Once heat set, I used an inking tool and added Walnut Ink across the cover.  I then used a paper towel to remove some of the ink.  The tree was die cut and inked with Rusty Hinge.  A layer of embossing powder was added and the tree was heat set.  Some Walnut Ink was added to the edges.

"F" is a grungeboard letter which I inked with Walnut Ink and then adhered to the tree along with the lettter stickers.  Glossy Accents was used as an adhesive as well as dimensional adhesive over the word. 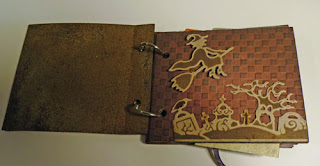 The page was embossed with an embossing folder, then lightly sponged with Walnut Ink.  Spellbinders die cut were used to die cut chipboard elements.  Before removing the elements from the dies, I sponged each piece with Walnut Ink.

A tree bark embossing folder was used on the left side and Alcohol Inks were sponged on top.  A picture was added as was a ticket letter which had been sponged with Spiced Marmalade.  A spider web embossing folder was used to create the backgound on the right side and Antique Linen Ink was sponged over it.  Letters were cut into squares and added on top, along with a die cut tombstone. 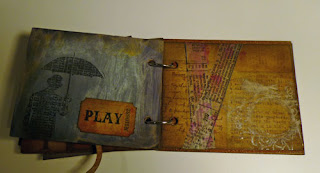 White paint used on black cardstock and wiped away to show some discoloration.  An Umbrella Man was stamped in black ink and embossed with Clear Embossing Powder.  A ticket was inked with Spiced Marmalade and added to the left side.  Tissue tape was inked with alcohol ink before adhering to the right side.  A stamp was place off center with white paint. 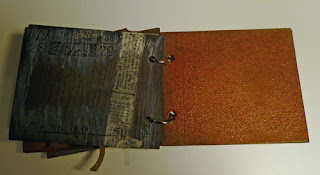 The left side piece of pattern paper was inked with Black Soot and Tissue Tape was added on top.  To create a "rusty" effect on the back cover, I covered the chipboard with Rusty Hinge and added Clear Embossing Powder.  Once heat set, I inked over the piece with Walnut Ink.

This was truly a fun mini album to make and share for Halloween.

Posted by Steph Ackerman at 5:00 AM