I was asked to be a guest designer for CutCardstock.com last week.  I created a summer party themed ensemble.  Here is the link to my post on the CutCardstock blog, entitled Summer Kickoff Series.

I received Kraft Brown Bag cardstock, Curious Metallic Cardstock and Chiyogami Origami paper to work with and was asked to create a Summer themed project.

Once I started creating, I just couldn't stop and ended up with this bright and sunny summer party ensemble which includes a banner, place setting cards and thank you gift boxes plus a thank you card. 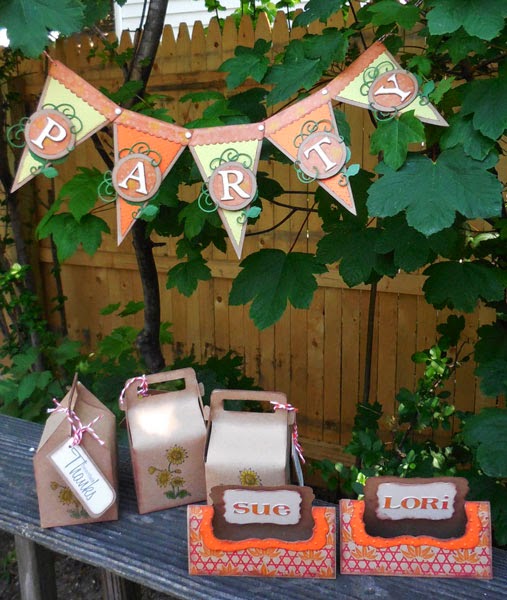 The banner was created with my Circuit and then inked with Clearsnap Chestnut Pigment Ink.  The layers were cut from  Kraft Brown Bag Cardstock and Curious Metallic Cardstock in 2 colors.  The Metallic cardstock layers were also embossed with a Cuttlebug embossing folder for dimension.  The letters were die cut from Kraft Brown Bag Cardstock and Origami papers using my Cricut.  Assorted foliage was die cut and placed behind the letters for more dimension.  A punch was used to create the banner tops with Origami papers.  Since the papers are very thin, I placed them on cardstock first then punched them - worked great. 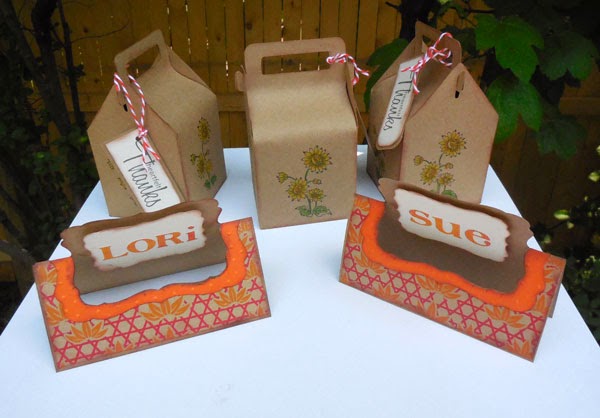 The place settings were die cut using Pop-a-Top die #17 from The Stamp Doctor and Kraft Brown Bag Cardstock.   Layers placed on top with Origami papers.  The die cut edges were cut from the left over Curious Metallic papers which coordinate with the banner, and then embossed with a Cuttlebug embossing folder.

Thank You gift boxes were die cut from my Cricut from Kraft Brown Bag Cardstock and all the edges were inked with Clearsnap Chestnut Pigment Ink before assembling.  Images were stamped using The Stamp Doctor Sunflower Bouquet stamps around the boxes using ColorBox Stephanie Barnard Licorice Ink, and then colored with Tombow Markers.  The sentiments were stamped on Cryogen White with ColorBox Stephanie Barnard Licorice Ink, inked with  Clearsnap Chestnut Pigment Ink, and matted with Kraft Brown Bag Cardstock before attaching to the boxes with twine. 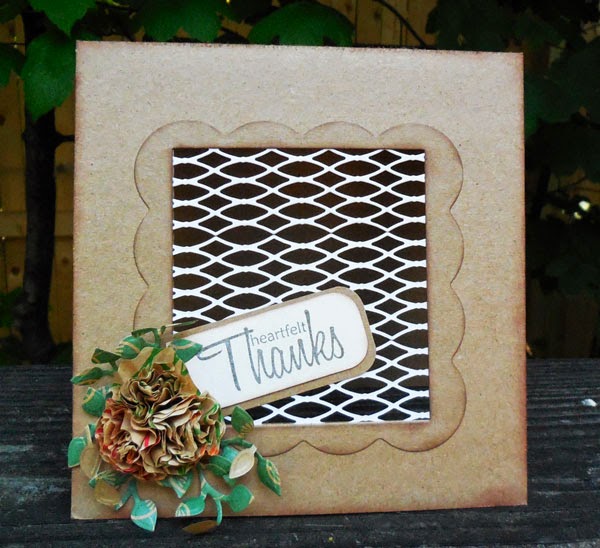 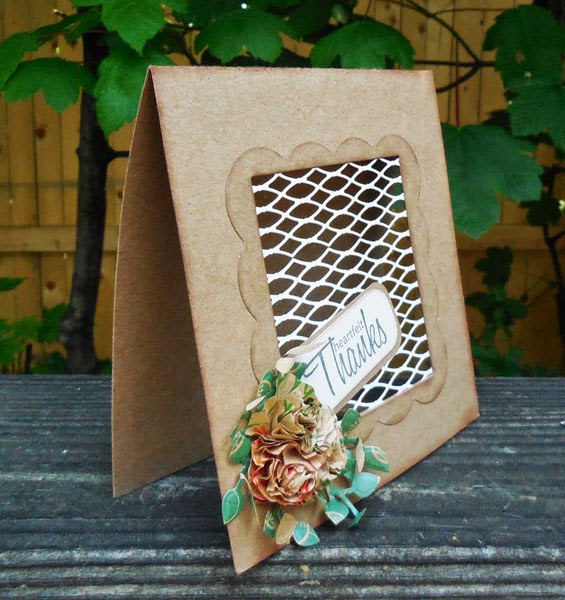 My Thank you Card uses Brown Bag Cardstock forming a 5 1/2" square card.  The mesh insert was die cut using a Memory Box die with Cryogen White cardstock.   Additional die cuts were used to create dimension on the card as well as to "finish" the card, both inside and out.   The layers were inked with Clearsnap Chestnut Pigment Ink before adhering to the card.  The sentiment was stamped  with ColorBox Stephanie Barnard Licorice Ink on Cryogen White cardstock, inked with Clearsnap Chestnut Pigment Ink, and matted with Brown Bag Cardstock.  The Stamp Doctor Bottle Cap and Paper Flower die set was used to create the flowers from Origami papers.  The Origami paper is PERFECT to create these flowers since it is very thin.  You can die cup 6-8 layers in one pass and form awesome flowers quickly.  Foliage was also die cut from Origami papers and added to the card behind the flowers.